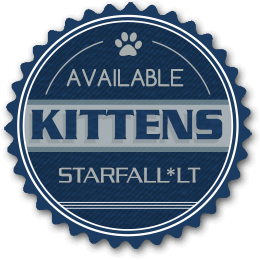 As specified in standard - the British Shorthair cat's coat is crisp, dense, plush and waterproof. Body is cobby, short, compact. Chest is wide and all legs are thick and short.
The Shorthair is strong cat of medium to large size. British Shorthair boys are larger than the girls. Difference in size is noticed when compared to other breeds. Average weight of boy is 5-10 kilograms, whereas a girl weighs up to 4–6 kilograms. Tabby and the silver shaded variety is smaller - boys being 4-5 kilograms and girls are 2.5-3.5 kg. British Shorthairs have strong boning and powerful muscles. The head is on thick and short neck. Big and round eyes are set wide. It can be described as a cat's equivalent of Bulldog. Round ears are set broad. Because of the full and round whisker pads this breed looks like a teddy bear with a smile.
Most of us know British Shorthair as blue (grey) cats, but this cat is bred in 100 colors variants, including variety of colors and combinations with patterning of calico, tabby, van, arlequin, tabby in other patterns and multicolors.

This is a lazy and quiet breed. After some time when she feel being family member, then cat become more friendly to people and bonds close. For all friendly family members she will show loyalty and patience, not just for someone picked or for person who bring her.
British cat is good companion for business people, who is not often in the home, but also perfect suits big family with childrens, because of affection and patience.
This cat adopts easy to most of the changes. You can expect your cat to be with stable patterns of behavior, stable personality and good tempered.
This breed tend to have independent character nature and it's known as not active cats. Most of time they don't going likely involved to very active and high energy games after leaving kitten-hood. British Shorthairs are quiet cats, and use voice only when asking for your attention.

This breed has a long lifespan to 15 or even more years. This depends upon their health and healthcare. British Shorthair should be fed carefully, looking into possibility of obesity, because cats are not especially active and its time taking it easy. Your veterinarian should help you with cat's nutrition and can create for you diet plan for all life stages, so can will receive all needed vitamins and microelements at all stages of growth.
Cats in cattery should be examined for HCM (Hypertrophic Cardiomyopathy) and PKD (Polycystic Kidney Disease) prior to breeding genetically and auscultated regularly on yearly basis, because Shorthair have a tendency to these diseases from related breeds, with which were mixed in the period of formation or recovery after the wars.

HISTORY of the BREED

BSH (British Shorthair) is first showcat! Breed is the antecedent of the breeding program and as you can guess already, this breed began in Great Britain. Almost until 20th century the Shorthair was a "usual" domestic cat also know as "moggy" in GB. By then, the British Shorthair had become a member of the British home and have been chosen for guarding land and home from rodents.
As is know from history, this breed arrival to Great Britain is tied with invasions of Roman Empire. Soldiers hold these cats because of endurance, hunting skills, strength and good nature. And after time the British Shorthair came to be welcomed into the home to share the warmth of the hearth with the family. Because this breed was already so commonplace and "smile" was so well known - that it inspired famously recognized illustration of a cat to this day, when J. Tenniel designed the Cheshire Cat which was used by in books "Alice's Adventures in Wonderland" by Lewis Carroll in 1865.
In the late 1800s one cat fancier Harrison Weir took his admiration for this breed to another step. Harrison's main point was to bring others of same thinking to gather together and pick best of the British Shorthairs. That is begin of cat fanciers. People gathered together in place where displayed and judged this breed in this way British Shorthair was strengthened and cultivated, choosing thoughtful pairings a.k.a selection. Harrison had success in organization of cat show at the London's Crystal Palace in year 1871. Now Harrison Weir is know as the father of the cat fancy.
After grow of cats' fancy, the interest in other breeds grew also. After some time to the public were introduced another, different and new breeds. Laster popularity was sidelined for more exotic breeds and in Britain in end of 19th century were popular cats with long hairs.
Because of wars and conflicts, the population of the British Shorthair was strongly reduced during the 1st WW. After was breeders have tried to bred the Persian breed with the remains of the British Shorthairs to survive and revive the population, but the Governing Council of the Cat Fancy demanded return the breed to its original form. It could take 3 generations of breeding back to British Shorthairs to cats eligibility for registration as pedigrees. This was repeated itself. But after 2nd WW remained very low population of Shorthair breed and British Governing Council of the Cat Fancy granted limited permission to crossbreed again with control and allowed outcrosses to similar breeds such as Persian, Chartreux and Russian Blue. Because of this, after Second World War Shorthair breed was changed somewhere. The British Shorthair now got a teddy bear look. Body was stout, whisker pads were full, mount was upturned mouth, eyes wide-open and round. American Cat Fanciers Association only in 1970 have registered Blue British Shorthair breed in United States of Amerika.